A student in Texas attempted to pay for her school lunch and the school called the police. Why? She used a $2 bill and the school thought it was counterfeit. None of the school administrators or faculty had ever seen a $2 bill before?

The eighth grade student of Christa McAuliffe Middle School became the subject of a police investigation. She told reporters, “I went to the lunch line, and they said my $2 bill was fake. They gave it to the police. Then they sent me to the police office. A police officer said I could be in big trouble.”

After authorities realized the $2 bill was in fact legal tender, they gave it back with no apology. She says the police officer who arrived “brought me my $2 bill back. He didn’t apologize.” 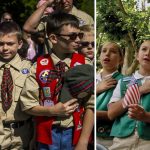