Doctors told a 90-year-old woman that she had a cancerous mass on her uterus. This was only two days after her husband of 67 years had just passed away. Things were looking dark. Doctors proposed different solutions like radiation and chemotherapy. Then she saw the light. Norma told them, “I’m 90 years old. I’m hitting the road.”

That’s just what she did. Rather than spending the rest of her life in a hospital bed, she decided to spend it living. She decided she would try new things, go new places, and do whatever the hell she wanted. Because why not?

Since then she’s done a lot. She took off on a huge road trip. She’s been to Florida, Missisippi, New Mexico, Louisiana, she’s hit Disney World, the Grand Canyon, Mt. Rushmore, and Yellowstone according to WSB-TV.

Norma’s daughter in law told ABC News, “She continues to surprise us on this trip. She’s getting healthier, I think, from eating well and being outside a lot. She’s breathing fresh air and getting to see new things all the time.”

The family’s documenting it all on her Facebook page called “Driving Miss Norma.”

She just couldn't decide and when you are old you LOVE cake!

You get the idea!

Love the face and the photo bomb! 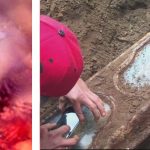