Kentucky judge who issued a no-contact order between an inmate and his family issued a temporary reprieve, with the mother’s permission, so that he could meet his child for the first time. The judge responsible for this act of charity was none other than the honorable Amber Wolf who made headlines earlier this year when she became outraged at the abuse of a female inmate who was denied pants and sanitary products for three days. James and Ashley Roeder, a pair of co-defendants both charged with burglary, were allowed contact for the first time since the husband’s incarceration. While James was serving his sentence in prison, Ashley had given birth to their son. 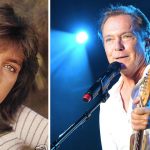