This video clip comes from a show called “The Golden Age of Rock and Roll” which was about just that. The clip was originally filmed in 1964 on TV’s “Hollywood a Go-Go.” Del Shannon’s runaway was released in 1961 and was the second most popular song in the western world that year. Even The Beatles recorded their own version. 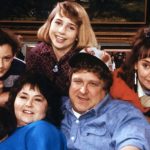