A huge portion of our planet is covered in solid ice, but can you imagine what would happen if it all melted? There are more than 6 million square miles of frozen water covering Antarctica and Greenland (and that doesn’t include all the ice in the arctic circle)!

The 1995 Kevin Costner apocalypse movie Waterworld comes to mind, but that’s actually a bit of an exaggeration. The reality is still pretty surprising. Nearly every major port city on the planet would basically disappear under water. Inland cities below sea level would also be affected by floods of unprecedented proportions. The entire state of Florida would completely disappear.

According to National Geographic, there is enough ice sitting on land to raise the global sea level 216 feet if it all melted. The entire Eastern seaboard of the United States would be almost completely wiped out.

While scientists and politicians cannot agree on what is causing climate change (man, nature, or both?) a simple fact remains, it is happening. The world is getting warmer, and it doesn’t matter whose fault it is. While a disaster like this will likely never happen in our lifetime, or even our grandchildren’s lifetime, it shows how much we really need that ice to stay frozen!

Take a look in detail at what our world would look like without those massive ice caps. 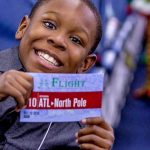