During the winter months, a pit bull mix named Zimba was discovered alone in Maryland.  Fortunately, the dog had a microchip, and the Caroline County Humane Society was able to determine his origins: Wichita, Kansas.

Volunteers at the Humane Society were eventually able to contact the dog’s mother, and it was then that they learned the dramatic story of how he ended up in Maryland.

At the time, Zimba was on a nice road trip with his owner’s boyfriend. However, Zimba’s owner claims that she and her boyfriend broke up while they were away, leaving the boyfriend unhappy and heartbroken. According to CBS Local Baltimore, he was so enraged that he supposedly abandoned Zimba in Maryland and stopped taking any phone calls from his ex-girlfriend.

Zimba’s mother had been searching for him since he vanished and was “thrilled” to learn he was safe. However, due of her profession and children, she couldn’t see how she’d be able to make the more than 1,000-mile trip to pick him up.

Zach and his girlfriend both used to work at the shelter. After hearing what happened, he promised to drive Zimba 1,000 miles back to Kansas. He claims to be a weekend-only bartender, so he had the entire week open and thought, “Why not?”

So Zach and Zimba got together, hopped in the car, and drove away.

Zach and Zimba made it safely back to Wichita and they had a blast on their road trip, which was captured on the Caroline County Humane Society’s Facebook page.

Zach did this strictly out of the goodness of his heart and didn’t ask for anything in response to his journey. Nevertheless, people who followed the story on Facebook reached out to the Humane Society to help raise money to pay for tolls and gas along the way.

Hear more about Zach and Zimba in the video below. 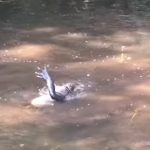 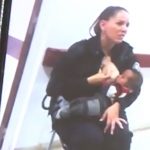