“That was the first blue whale we’ve ever filmed with a drone. I could not believe what I was seeing as I looked through the special goggles that allow me to see from the drone’s POV. This one whale was massive, probably over 80 feet long. And it was coming right at me in the drone! Wow! I hated to bring the drone back and lingered so long I barely made it back to the boat before the battery ran out. At one point we had three whales on the viewfinder it was just amazing. They are twice the size of the gray whales we have been seeing and our whale watching boat had just left a mother and calf gray whale when this giant trio was spotted by Chuck Gathers, one of the crew.”

This footage is just incredible. 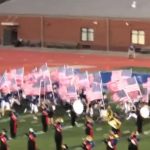