Erin Wissner was upset after a complete stranger criticized her adult daughter’s outfit while her family was playing at a local trampoline park. Her daughter’s questionable outfit consisted of a T-shirt and gym shorts, which makes complete sense for a trampoline gym. Her daughter, a young soldier, simply replied “yes ma’am.” Erin, however, had more to say. In a post on Facebook she wrote,

To the woman at Sky Zone in Monroeville today who felt the need to tell my daughter that she should dress more appropriately in a public place because your husband and son were noticing her.. I feel sorry for you.

She was wearing athletic wear (Soffee shorts and a T-shirt) at a trampoline park.

What you don’t know is that you were addressing Private First Class Walters. An 18 year old young strong woman that left her family to take an oath to defend you and your family.

This is the first time she’s been home in 5 months and was enjoying some freedom and fun with her younger siblings before returning to her post next week where she will continue to bravely protect this country. A soldier. While you and your family were wearing shorts this summer she was wearing camo fatigues and boots, carrying a 100 (lb) backpack, mile upon mile in 102 degree heat.

Those 5 months of rigorous grueling training have given her a rocking hard ass body. She’s tall and beautiful. Perhaps you should be more concerned with your pathetic husband that can’t keep his eyes off young women.

Consider blaming his behavior and not her attire. Teach your son that women are not sex objects to be ogled. That women have value and strength beyond their physical looks. Because my daughter is an American Soldier, she respectfully responded witha simple “yes ma’am”.

We truly feel sorry for you and your insecurities.

Wissner also included a photo of her three children.

Private First Class Walters is standing on the right in the image above. Her story quickly went viral and was picked up by several news agencies. The vast majority of commenters stand in full support of Wissner. 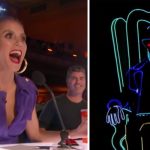