An orphaned baby chimp arrived at a sanctuary after being chained up his entire life.

The baby chimp named Farah became an orphan after a man shot his mother. The culprit decided to keep Farah chained and locked up in his house, hoping to sell him as a pet.

After the trauma this poor chimp endured, he didn’t want anyone or anything to touch him.

The Mefou Primate Sanctuary learned of Farah and went to get him. They tried making Farah comfortable with leaves and a blanket be he still didn’t want anyone touching him.

After about 3 months of rehabilitation, the sanctuary decided it was time to introduce Farah to the other chimps. They had no idea how they would react.

Farah met another chimp just like him, and instantly embraced with a hug. No one thought he’d react the way he did. 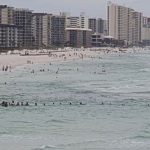