In Pleasant Hill, Pennsylvania, a customer is making a claim that one Party City employee refused to sell her balloons after the employee found out the balloons were for a memorial ceremony in honor of a police officer.

Karly Lane says that she went to a Party City on Saturday to buy black and blue balloons for an officer who died in accident while off-duty. She alleges that the clerk told her that she would not support a police officer. The clerk then had another employee fill the order.

Party City is committed to our customers and the community. Corporate management is looking into the matter to uncover what transpired and will take action accordingly. 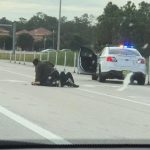