Officer Mitch believes in the students at Heritage High School in Brentwood, California. He was crushed to learn a student he knew well was involved in a ‘distasteful’ video being shared online. The principal handed him a phone and Officer Mitch braced himself for the worst while Sienna, the teen responsible for the video, sat crying beside him. Within seconds, Mitch was crying too.

As soon as the video started he realized the entire meeting was an elaborate ruse and the video was anything but distasteful. The students had taken it upon themselves to create a video thanking Officer Mitch for everything he does. Eyes still wet with tears, Officer Mitch left the office to find a flash mob waiting for him dancing to his favorite song “Downtown” by Macklemore.

The surprises didn’t stop their as Officer Mitch was escorted on stage where he was showered in thank you notes and gifts from a students who never failed to notice how much he cared. 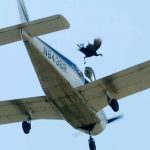