It’s hard to believe, but the image above is an actual police sketch drawn by a sketch artist employed by the Lancaster Police Department in Pennsylvania. What’s even more unbelievable is that it actually led to an arrest.


“While the sketch provided by the witness may have appeared amateurish and cartoonish, it, along with the distinctive physical descriptors, jogged the memory of at least one investigator to provide a potential suspect name,” the Lancaster Bureau of Police officials wrote in a Crime Watch post update last Wednesday.

“Off. Rothermel took a report that an unknown male pretended to be an employee at a stand inside Central Market when an employee was away from the stand,” the original report said. “The male took cash from the business and left the area on foot. The suspect was described as a male 30-40 years of age, 5’04” tall, petite build and was possibly South American or Asian.”

A witness described the suspect as having “straight, black hair” and “wide-set cheekbones and a pointed chin.” The image above was the best the sketch artist could come up with, but it was enough to jog the memory of a veteran officer. A lieutenant with the Lancaster Police Department recognized the man, 44-year-old Hung Phuoc Nguyen.

Nguyen, a homeless man, had been previously arrested and photographed by the police. A witness positively identified Nguyen from a photo array as the person who robbed the Central market.

On February 7th, a warrant was issued for Nguyen’s arrest for two charges of theft by unlawful taking. He has not yet been located by the Lancaster police. Anyone with information about Nguyen’s whereabouts is asked to contact the Lancaster Police at 717-735-3300 or Lancaster Crime Stoppers at (800) 322-1913. 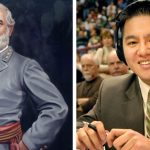