Charlie Murphy, brother of Eddie Murphy, and a comedian and star in his own rite, has passed away today at the age of 57 after a battle with Leukemia.

Charlie Murphy battled leukemia and has been undergoing chemotherapy at a NYC hospital. According to TMZ, the family was shocked as they believed he was getting better.

Murphy co-starred on “Chappelle’s Show” with Dave Chappelle and has since toured as a comedian and starred in many other television shows including “Are We There Yet?”

One of his most famous sketches centered around a true story about the artist Prince. 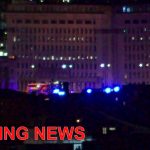