Courtney Hadwin was more than a little nervous when she stepped onstage before the judges of America’s Got Talent. The 13-year-old singer was so shy, she almost couldn’t perform! Fortunately a few kind words from judge Mel B gave her the confidence to power through.

“Don’t be nervous,” Mel said encouragingly. “I know this is a big stage, and there are a lot of people here, but you’re here for a reason, so go for it and good luck!”

The young starlet thanked Mel before closing her eyes in preparation. The music starts a few seconds later and Courtney belts out one of the most magnificent rednditions of Otis Redding’s “Hard to Handle” we’ve ever heard. Courtney’s voice sounds so much like Janis Joplin it’s uncanny.

Hear her magnificent performance in the video below.

I didn't know what to expect when I auditioned for @AGT but the golden buzzer was more than I ever could have dreamed of. Thank you so much @howiemandel I am so happy and can't thank you enough xx pic.twitter.com/qqNKUWyzVk 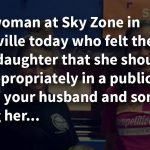